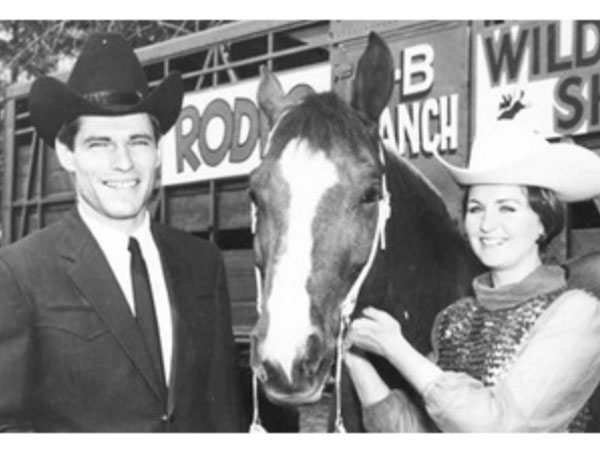 Isn’t it Readers Digest that carries the feature “My most Unforgettable Character”? Let me steal that title for a word or two about the passing of an old friend from my St Catharine radio days – Tom Bishop. I was the Morning Man at CKTB in the late 70’s and early 80’s and while there had the pleasure of getting to know this wonderful guy. The May 5th, obituary of his passing sent to me paints a picture of a life well-lived and in his honour, I’d like to share it with you. Tom was a true renaissance man, entrepreneur and one of a kind. He was born in 1938 into a family of Wild West Show performers. His father, enamoured with the Buffalo Bill Wild West Show which he had seen in person in England, started his own show based in Ridgeville, Ontario starting in 1914. Tom grew up performing along with his sister Lorna, trick riding and trick roping and appearing on the CBC show “The Cliff McKay Holiday Ranch in Toronto in the 1950’s. After High school, Tom began working at local radio stations and had his own show at 18 called the “Melody Corral” playing cowboy music. He also had a popular show called the “Supper Club” on CKTB radio. After marrying in 1965, Tom and Jan were hired to bring their horses to Blackpool, England for a show called “The Canadian Way of Life”. Once in Europe, they discovered that the company had gone broke, leaving them stranded with their horses. Tom and the other cowboys and cowgirls put together a Wild West Show to earn enough money to get their horses back to Canada.

Back at home, Tom and Jan began a Wild West Show and Rodeo, touring the United States and Canada. This included numerous shows at the CNE and Toronto’s Royal Winter Fair. Tom became one of the Toronto film industry’s early ACTRA members as a stuntman, actor and head wrangler. His first job was with the CBC television series “Forest Rangers in the 1950’s and he continued to work in the film industry up until last year such shows as Road to Avolnlea, Murdoch Mysteries and Anne of Green Gables. A self-educated man, he built a number of horse-drawn wagons including a police wagon, a steam fire engine and a working steam calliope that was a labour of love and took him 10 years to build. He machined the brass whistles on a 1940’s lathe and painstakingly made the wood carvings on this two tonne horse drawn wagon. Tom was a kind man with a ready smile, great sense of humour and an ability to find a solution to any problem. My sincere condolences to his family. Happy Trails Tom.