Remembering: The Day the Music Died 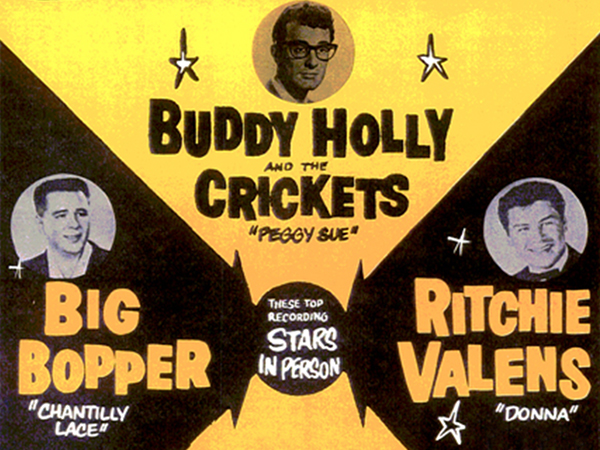 It’s one of the most infamous dates in all music history – February 3rd, 1959. It’s ‘the day the music died’ – according to Don McLean’s classic ‘American Pie’. He was recalling how he felt, as a boy delivering newspapers that day, with the tragic news on the front page – ‘top rock stars die in crash’. Buddy Holly, Big Bopper and Ritchie Valens, along with the pilot, all died in a plane crash on a cold snowy night outside Clear Lake Iowa, following their final performance on that ill-fated ‘Winter Dance Party Tour’.

It was the first major tragedy to hit the young rock’n’roll fans of the 50s – Holly was already a major star, yet just 22; The Big Bopper, a radio dee-jay with a big voice and a bigger novelty hit in ‘Chantilly Lace’, was ‘the old man’ of the trio at 28, and Ritchie Valens, was just a kid, at 17. Much has been written and said of that dark day – I’ve done a music special around February 3rd myself, every year – and this year will be no different. If you love music, especially rock’n’roll music at its purest, it’s a day you simply must recognize. And I’m glad – despite the sadness of the occasion – to once again, find the best songs to spotlight these three stars. ‘Three Stars’ was the title of the first tribute song to follow a rock’n’roll tragedy – and I’ll certainly play it – along with their major hits, along with a few tasty surprises.

I’ll also continue our year-long series featuring ‘the greatest groups of our time’ – in alphabetical order from A to Z, ABBA to Zombies. We’re up to The Beatles (hugely influenced by Buddy Holly), and The Band. Plus remembering Terry Black on what would be his 70th birthday, and Zoomer Radio favourite, Nikki Yanofsky on her 25th. This will be a great show – and I hope you’ll join me – this Sunday, February 3rd, from 2:00 till 4:30 … ‘Vintage Favourites’, our Sunday afternoon radio tradition.