65 Years Ago Elvis Made his Debut on the Louisiana Hayride 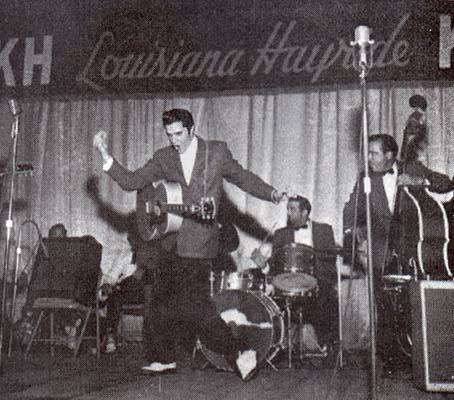 It’ll be a very busy and fast-paced show this Sunday – I’ve got so much I want to play for you. I always begin with ‘The Fabulous Fifties – and Beyond’ between 2-3pm. and this Sunday I’ll have a real treat for Elvis fans. It was 65 years ago next week, Elvis made his debut on the Louisiana Hayride (after his flop at the Grand Ole Opry). The Shreveport-based alternative to Nashville’s ‘Opry’ was more appreciative of what the young ‘Hillbilly Cat’ was offering, and they offered him a year-long contract to play every Saturday night after his Oct.16th debut in 1954. And – fortunately for us – there was a recording made of Presley’s debut at the Hayride – the earliest available recording of an Elvis performance. It’s pure magic, and I’ll play it for you this Sunday afternoon.

Our main feature is on memorable TV theme songs – especially those that became hit records. Any idea what was the first #1 Billboard hit song based on a TV theme ? A hint – it was one of the biggest fads of the 50s and a smash hit in 1955. I’ll have the answer, and play you the song during this Sunday’s show. I’ll also continue our year-long spotlight on ‘the greatest groups of our time – in alphabetical order’ with Sly & The Family Stone. And I’ll spotlight two legendary Canadian albums released 50 years ago: The Band’s second album and The Guess Who’s ‘Canned Wheat’ – which was also their second album since their comeback with ‘Wheatfield Soul’ and the classic ‘These Eyes’.
Like I said: a very busy edition of ‘Vintage Favourites’ – and I hope you’ll tune in for the memories this Sunday between 2:00 and 4:30pm.

This Week on Vintage Favourites: January 24

This Week on Vintage Favourites: January 17

This Week on Vintage Favourites: January 10