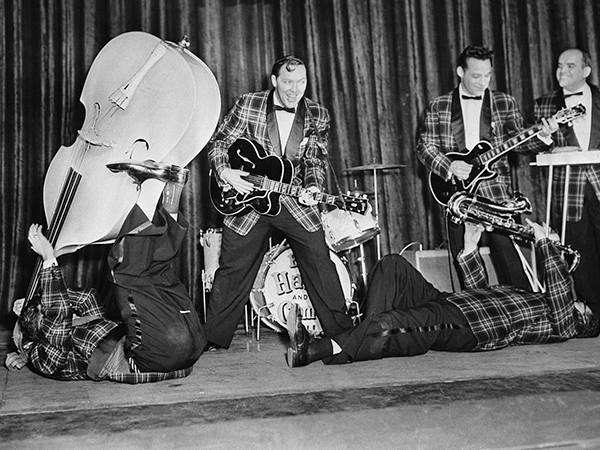 On July 9th, 1955, Bill Haley & His Comets went to No.1 on the US singles chart with ‘(We’re Gonna) Rock Around The Clock’, staying at No.1 for eight weeks and becoming one of the biggest selling singles of all time.

It was not the first rock and roll record, nor was it the first successful record of the genre (Bill Haley had American chart success with “Crazy Man, Crazy” in 1953, and in 1954, “Shake, Rattle and Roll” sung by Big Joe Turner reached No. 1 on the Billboard R&B chart). Haley’s recording nevertheless became an anthem for rebellious Fifties youth and is widely considered to be the song that, more than any other, brought rock and roll into mainstream culture around the world.

The song is ranked No. 158 on the Rolling Stone magazine’s list of The 500 Greatest Songs of All Time.