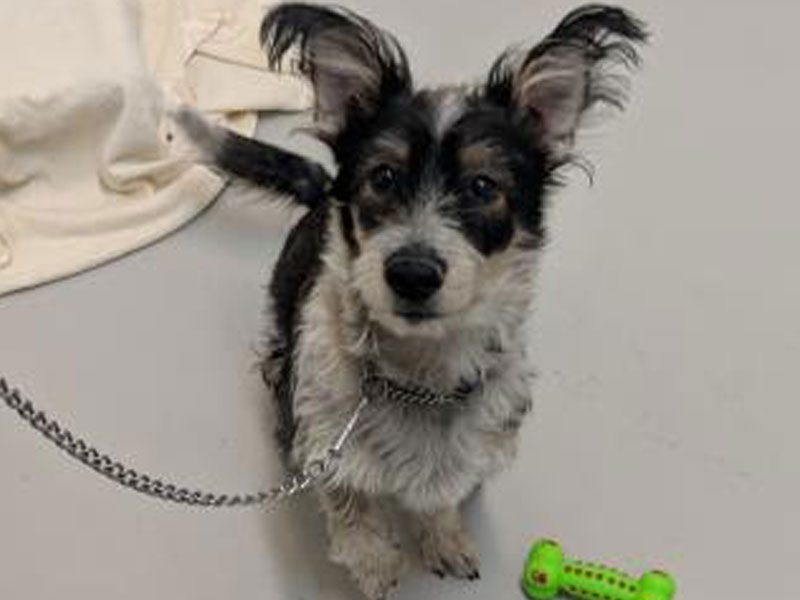 Baxter’s only got one speed – fast! He loves going like THIS here and like THAT there. Wow, look at him go! You better get out of his way! He’s a “live fast” kind of doggie with a free spirit hungry for adventure. His mind is often occupied with open fields and squeaky toys. He loves chasing his favourite balls and playing fetch!

Baxter ain’t no city boy. All the cars and bikes and big crowds of people and … well, just about everything you’ll find in the city can go take a hike! He can get really anxious when there’s too much going on around him, and when he’s anxious, the little guy can bark, lunge, and even snap at people! He also doesn’t like other doggies! Probably because he secretly knows some of them can run much faster than he can. He often barks, lunges, and even snaps at dogs, too. How rude!

Baxter is definitely a country boy with a more sensitive nature. He’s picky about his environment and his people. As you’d expect, he’s been really struggling in the shelter thanks to the daily activity and traffic around him. This has made focusing on confidence building and behaviour skills very difficult! He needs a spot where he can hear himself think! All these flippin’ dogs and people and cars and bikes are throwing him off!

On top of his behaviour, Baxter has also had house soiling issues in the past. Woops! He really didn’t want us telling you about this, but we kinda have to! It’s something he’d like to work on in a calmer environment where he can actually focus and learn.

Baxter is what you’d call “complicated”. He knows what he likes and what he doesn’t like. He’ll need someone who’s not only patient with him, but someone who can really connect with him and show him that everything’s going to be okay.

Baxter has the potential to thrive if in a quiet environment where he can unwind and focus. He loves playing with his toys and is such a sweetheart when he’s calm and confident. He’s looking for an experienced, patient, and calm family in an adult-only home somewhere in the suburbs or in the country. He’s really eager to work on his behaviour, and he hopes his new family would be too! If there are other dogs in the home, he would really appreciate a meet and greet here at the shelter first!