The key to a life jacket locker on the Titanic hits the auction block Saturday in England. The rusty, 10-centimetre key was found on the body of a third-class steward on the doomed ship. It’s estimated the key could bring in more than 80-thousand dollars. The key was used to access life jackets that saved lives as the ship sank. The auction also includes a letter from a senior officer that describes his strange feeling about his posting to the ship. Also included in the sale is a postcard from the ship’s 25-year old wireless operator who sent distress messages to other ships as the Titanic sank. Saturday’s auction is one of the biggest involving Titanic memorabilia for many years. More than 1,500 passengers and crew were killed when the Titanic sank on April 15, 1912. 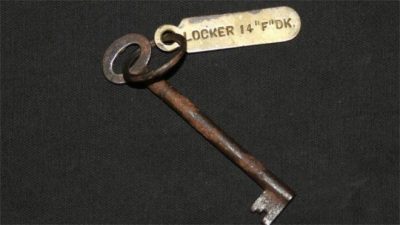