It’ll be “1984” all over again next week as close to art-house theatres in the United States will be showing the movie version of George Orwell’s masterpiece. The screening is meant as a commentary on the presidency of U-S President Donald Trump. 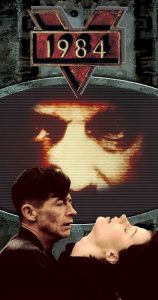 Since Trump’s election, the Orwell book has charged back on the bestseller lists as Trump and his aides have spoken of ‘alternative facts’ and ‘fake news’ — similar to the truth-bending methods outlined in the iconic novel.