A guide to spotting fake news has won the top prize at the National Business Book Awards held in Toronto Monday. The timely book called “A Field Guide to Lies: Critical Thinking in the Information Age” was written by neuroscientist Daniel J. Levitin who takes home the $30,000 prize. The term fake news has is quickly becoming part of our modern language often used by U.S. President Donald Trump to denounce unfavourable media coverage. Levitin argues in his book that we should reject the term because simply by putting the word fake in front, doesn’t make it news. Now in its 32nd year, The National Business Book Award is handed out annually to the most outstanding Canadian business-related, non-fiction book of the previous year. Last year’s winners were Jacquie McNish and Sean Silcoff for their book about the rise and fall of Blackberry. 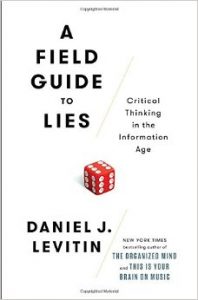