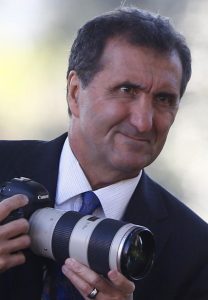 Souza’s time with Obama dates to 2005, when Obama was a freshman senator from Illinois, and continued through both terms of his presidency. Souza has built a large internet following in recent months by posting photographs of Obama that contrast with images from President Donald Trump’s White House. Recently, he posted a photo of Obama seated respectfully under a painting of Ronald Reagan, a counterpoint to a photo of Trump guests Sarah Palin and Ted Nugent mocking a portrait of Hillary Clinton.