U-S President Donald Trump has upset British politicians and police officials with his tweet following a bomb attack on a London subway car Friday during morning rush hour. Trump tweeted the attack was by “sick and demented people who were in the sights of Scotland Yard,” suggesting police missed an opportunity to prevent it. British Prime Minister Theresa May says speculation about an ongoing investigation is unhelpful. As many as 29 people have been treated for injuries. The blast burned some people and others were injured in the ensuing panic. Authorities are still searching for suspects. 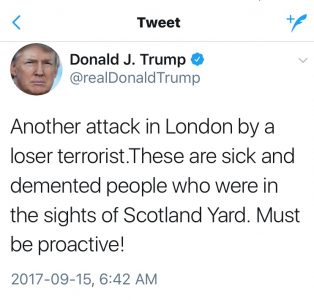