The mayor of San Juan, Puerto Rico says there is only one goal — saving the lives of people struggling after the island was devastated by hurricane Maria. Carmen Yulin Cruz’s comment follows several tweets by U-S President Trump today accusing Cruz of showing “poor leadership ability.” Cruz gave an emotional news conference Friday, accusing the Trump administration of “killing us with the inefficiency.” Trump also says the mayor was complimentary only a few days ago, but has now “been told by the Democrats that you must be nasty to Trump.” The U-S president plans to visit the storm ravaged island this week. 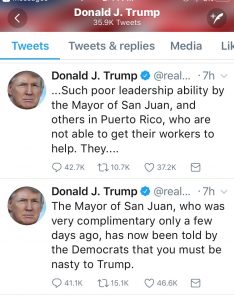