Edmonton police are investigating what they’re calling a terror attack in the city Saturday night and on Sunday, investigators say the man behind the overnight attack is known to police. The suspect allegedly drove a car through a traffic barricade outside the Edmonton Eskimos C-F-L game, hitting an officer and then launching a knife attack. He then quickly fled the area on foot. A few hours later, the suspect was stopped while driving a U-Haul truck but took off at high speed when identified,prompting a chase. The U-Haul then start targeting pedestrians, hitting and injuring four people, before rolling onto its side. The injured pedestrians were taken to hospital. The 30-year-old suspect was arrested at the scene. Edmonton Police are working with RCMP and other security agencies and believe the man acted alone. The police officer’s injuries are not critical. The medical condition of the four pedestrians was not released.Police found an ISIS flag in the car. 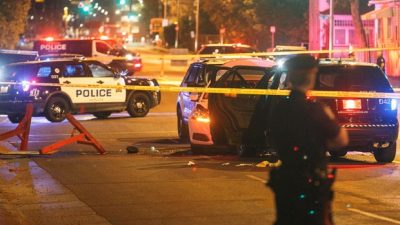