The Prime Minister is in Washington to begin the next round of NAFTA negotiations. Opposition Conservative Leader Andrew Scheer said Justin Trudeau has already put Canada’s negotiating team at a disadvantage. Sheer said the Conservatives would like to see softwood lumber and Canada’s auto sector protected under NAFTA,in order to avoid extensions and deals every few years.
In Washington on Tuesday, Canada’s Foreign Affairs Minister had some strong words when asked about blistering comments by a leading Republican senator who says Donald Trump might cause “World War III.” She told a panel discussion that Canada finds itself navigating the most uncertain moment in international relations since the end of the Second World War. She didn’t refer to Trump by name. 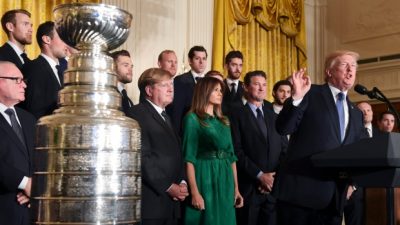 Meantime, the U-S president honoured the Stanley Cup champion Pittsburgh Penguins at the White House Tuesday afternoon and he paid special mention of Canada’s Sidney Crosby.It was a controversial trip for the champions, who say it’s the final moment of celebration for a championship season, not a statement about where they stand on the U-S President.