TRAFFIC CHAOS ON KING AS MOTORISTS ADJUST TO NEW RULES

Getting around King Street by car today is a whole lot different and more problematic. The King Street Pilot project went into effect Sunday morning at 7 but it is getting its real test Monday morning with back-to-work commuters. 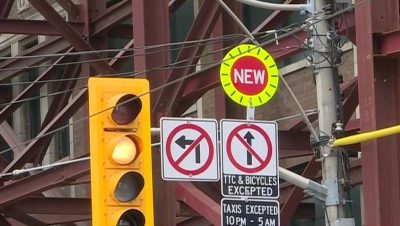 Motorists along King West between Bathurst and Jarvis will be forced to turn right after just one block and there’s no more on-street parking. Toronto Police Constable Clint Stibbe was monitoring the situation this morning and said the non-compliance rate was unbelievable at 70 – 80 per cent. There’s plenty of signage and police won’t issue tickets until next week to give drivers time to adjust to the new rules. It seems drivers will need that grace period as video posted to social media yesterday indicate drivers are confused by the new rules. The video shows a number of cars driving straight through without turning right at intersections. Some 20 thousand drivers use that stretch daily, compared with 65 thousand who ride the streetcar.