PATRICK BROWN OUT AS PC LEADER

So what now for Ontario’s PC party that finds itself in crisis just months ahead of the next provincial election in June. After holding a late-night news conference to deny new sexual misconduct allegations, Progressive Conservative Leader Patrick Brown released a statement overnight saying he is stepping down while he fights to clear his name. Brown said defeating Premier Kathleen Wynne in the upcoming election is “more important than one individual,” and so he will resign as leader but stay on as the M-P-P for Simcoe North. C-T-V News reports two women allege graphic sexual misconduct dating back to when Brown was a federal M-P in Barrie. It’s expect that the party caucus will decide on an interim leader soon. A number of names are being floated as replacements including relative newcomer Caroline Mulroney, Vic Fidelli, Lisa McLeod and John Baird. Ontario N-D-P Leader Andrea Horwath said she was disgusted by the allegations and was quick to call for Brown’s resignation before he decided to step down. Premier Kathleen Wynn issued a statement praising the women who came forward calling it a difficult and brave move. 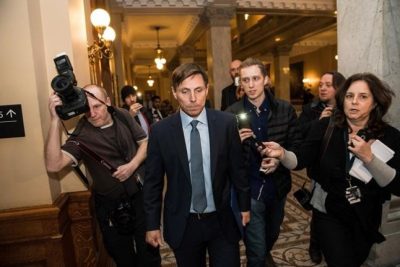