PARKED CAR CAN REACH DANGEROUS HEAT IN NO TIME

It’s no secret that a car parked on a hot summer’s day can turn into a scorching oven. But now scientists know just how fast it takes to heat the up. A new study by two American universities found that just after an hour in the sun, researchers found a vehicle’s dashboard will be 68 Celsius, the steering wheel 52 Celsius and the seat 50 Celsius. Researchers say it takes just over an hour for the body’s core temperature to reach 40 Celsius, resulting in heat stroke. Police aren’t speculating if heat was a factor in the death of a three-year-old boy found Wednesday without vital signs in a vehicle in Burlington. Every year in the United States, 37 children die after being left in hot cars. The  new study, published in the journal Temperature. 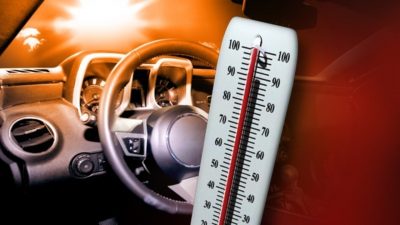