G7 SUMMIT - NO PROGRESS ON TRADE

Donald Trump says he wants to make a deal on NAFTA, and he’s open to working with the current agreement or create separate deals with Canada and Mexico. The U-S President was the last to arrive and the first to leave the G7 summit in Quebec. Speaking before his departure for Singapore for a peace summit with the North Korean leader, Trump insisted that either trade arrangement must have a five-year sunset clause. But Canada is opposed, saying renegotiating the deal every five years would create perpetual uncertainty and harm long-term investment. Disagreement over the sunset clause was the deal breaker that scuttled a possible meeting between Trump and Prime Minister Justin Trudeau in Washington late last month in an attempt to bring the NAFTA talks to a conclusion. After the summit, Canada’s Finance Minister sounded optimistic saying both sides are still talking, and that’s a good sign. Meantime, Trump created a distraction Sunday morning when he showed up late for a G-7 meeting on women’s empowerment. Both Prime Minister Justin Trudeau and Foreign Affairs Minister Chrystia Freeland tweeted photos of the empty chair. 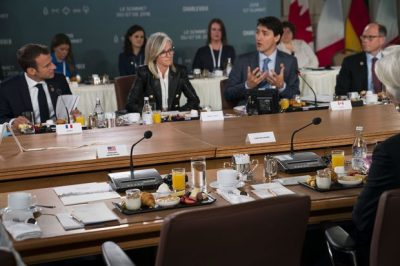