ROYAL BIRTHDAY FOR THE QUEEN IN LONDON

It’s a big day for Queen Elizabeth as the 92-year-old attends her official birthday celebration, even though her actual birthday is April 21st. But tradition dictates the country celebrates it when the weather is a little warmer. The Duchess of Sussex made her first appearance on the iconic balcony at Buckingham Palace along with husband Prince Harry who joined the Queen and other members of the royal family in today’s traditional Trooping the Colour ceremony. Military units form the Horse Guards paraded ahead of official ceremonies and a marching bank playing God Save the Queen. 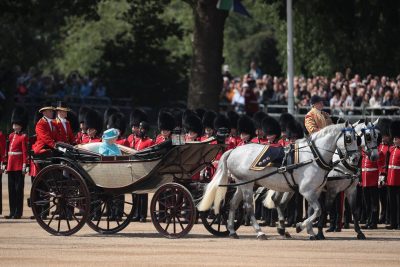