JUSTIN TRUDEAU GETS THUMBS UP FOR TOUGH RESPONSE TO TRUMP

Justin Trudeau’s approval rating is up after his public feud with the US President following the G7 summit. 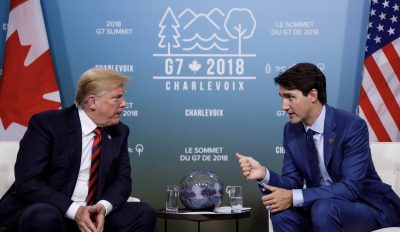 Angus Reid reports Friday that Canadians are feeling confident after the Prime Minister’s hard line in negotiating with Donald Trump. A new poll suggests that 62 percent of Canadians strongly support Trudeau’s handling of the spat after Trump called our PM weak and dishonest. And 59 percent say counter tariffs in retaliation was the right approach. Trudeau’s tougher tone is a political boost for the prime minister, after a year of continually diminishing approval.