BUCK A BEER COMING TO ONTARIO

Premier Doug Ford says buck a beer is coming back to Ontario. That’s the suggestion in a cryptic video message he posted on his twitter account Friday that coincided with International Beer Day, as well as the August long weekend. In it, he’s seen saying “We have two hundred and sixty of the greatest brewers anywhere in the world. My friends, we are going to do our part because a buck a beer is coming to a shelf near you.” He campaigned on a promise to lower beer for its current $1.25. Brewers would not be required to charge less, and the lower minimum price would not apply to draft beer, nor would it include the bottle deposit. A source says the government is hoping to get brewers on board by launching a “buck-a-beer challenge” with incentives for those who cut prices to a dollar. 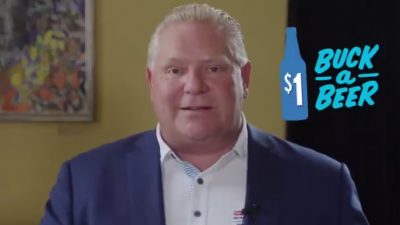