The number of people killed this morning in Italy after a bridge collapsed has been downgraded 20 from 30 this past hour. However, Italy’s Civil Protection Agency caution that number could change. In addition, 10 people are critically injured, another six seriously injured and three more lightly injured. Firefighters and other rescuers are still searching for survivors.  A large section of a highway bridge in northern Italy collapsed during torrential rains today. The Morandi Bridge is a major thoroughfare, connecting the port of Genoa with the airport and towns along the coast to the west. Vehicles and tonnes of twisted steel and concrete plunged 45 metres into an industrial area below. A firefighter says two people were pulled alive from vehicles in the rubble and airlifted to hospital. A pair of students from Toronto were in a train due to pass under the  bridge in Italy just five minutes after it collapsed. Tamar Bresge  says at first she thought the train she and Melissa Light were aboard  was facing a routine delay. The pair say it was surreal to find out they avoided disaster by mere minutes.

This is what the bridge looked like before and after it collapsed. 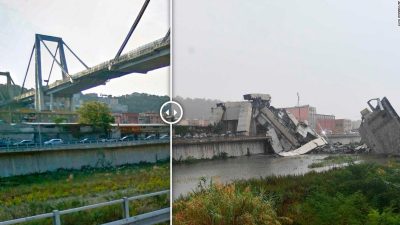