Musical "Come From Away" Inspires Documentary 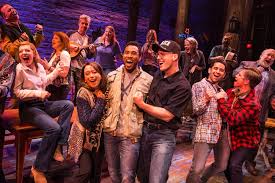 The hit musical “Come From Away” is now the inspiration for a new documentary set to air on September 11th.

“You Are Here; A Come From Away Story” takes a deeper look at the hospitality shown by the citizens of Gander, Newfoundland after thousands of airline passengers and crew members were stranded.

The show airs on the 17th anniversary of the 9-11 attacks on HBO Canada.