Residents displaced by a fire at 650 Parliament took their frustration to the streets for a rally. 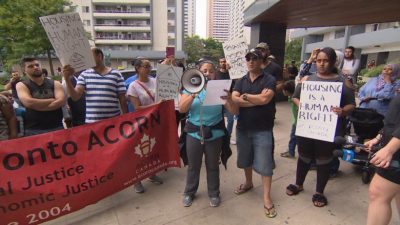 The group protested outside the building Friday hoping to meet with property managers but they were met by security guards. A few hours later a representative for the property manager held a news conference to encourage residents to find alternative accommodation and added they are doing everything to get residents back home. 700 people were displaced by the fire 12 days ago and have been staying at hotels across the city. But Friday, they were forced out and for many, that means staying in a shelter if they don’t have friends or family close by. Property managers announced that residents of the north tower could be back in their units by Thanksgiving but south tower residents could be out for sex months. Donations of clothes and school supplies were handed out Saturday and the Red Cross has so far raised over $96,000 for the displaced residents.