PROVINCE PLANS TO INVOKE NOTWITHSTANDING CLAUSE

In a rare move, Premier Doug Ford’s  government is invoking the notwithstanding clause to override judge’s decision on Bill 5 that reduced the size of city council. This will be the first time the clause has been used in Ontario. Ford also announced his government is immediately appealing the Ontario judge’s decision that found the province’s move to cut the size of council unconstitutional.Ford calls the court’s decision “deeply concerning.” The Premier was asked in light of the royal smack down from the scathing statement by the Ontario Justice, will his government’s response be seen as “over the top” and “dramatic.” He responded by saying he was elected, the judge was appointed. Ford added that only left wing councillors are against Bill 5. The Premier will  recall the legislature on Wednesday to invoke the notwithstanding clause. While this is the first time the not-with-standing clause has been used in Ontario, it’s just the 4th time its been used in Canada.Ontario NDP leader Andrea Horwath says she’s astounded to by province’s decision to use the rarely used notwithstanding clause so it can again, proceed with efforts to slash the size of city council.Horwath believes Doug Ford is doing this because of a personal and political grudge with city council. 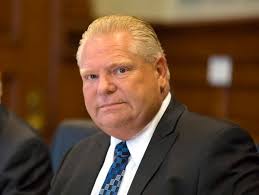