What’s believed to be Glenn Gould’s first piano will be unveiled in Toronto today, on what would have been the famed pianist’s 86th birthday. The Glenn Gould Foundation didn’t even know the piano existed until its director met with two sisters  this summer, who’s parents were friends with the Goulds. The women bought the upright piano from them in 1955. Foundation Executive Director Brian Levine says it’s extra special because the famous musician signed it.The Toronto born Gould is one of the most celebrated pianists of the 20th century. Today is the city’s first official  Glenn Gould Day, after council passed a motion last year that September 25th would be dedicated to the iconic musician. 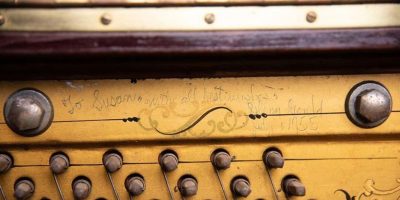 Sisters Susan Rayner and Heather Tucker grew up with Glenn Gould’s first piano in their home.