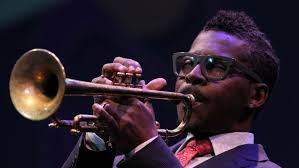 The jazz world is mourning the loss of Grammy-winning trumpeter Roy Hargrove.  Hargrove died of cardiac arrest according to his longtime manager.

The trumpeting genius had been admitted to hospital for complications due to kidney disease.

He won his first Grammy in 1998 with his Afro-Cuban band Crisol for its album ”Habana.”

He won another in 2002 for ”Directions in Music; Live at Massey Hall,” featuring a band he led with Herbie Hancock and Michael Brecker.