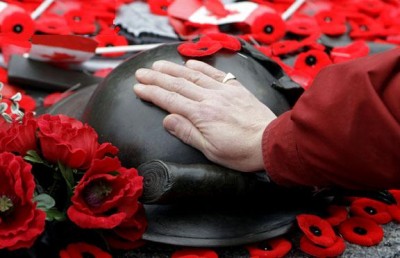 It was 100 years ago Sunday that the First World War came to an end.

Approximately 65, 000 Canadian soldiers died in what was believed, at the time, to be the war to end all wars.

There are a number of Remembrance Day ceremonies taking place Sunday, including ceremonies at Queens Park and Toronto Old City Hall.

The Queen’s Park ceremony begins at 10:45 at the Veteran’s Memorial on the front lawn of the legislature.

Also at 10:45 the city of Toronto holds its Remembrance Day ceremony at the Old City Hall cenotaph.

Expect road closures around both events.

The TTC also plans to stop all vehicles at 11 o’clock Sunday to mark the 11th hour of the 11th day of the 11th month.  That’s when the Armistice was signed, signaling the end of the First World War.

There will be parades marching through the downtown core of Toronto on Sunday, click here for more details.