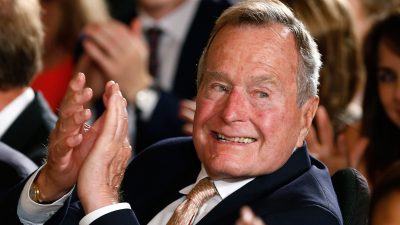 Former U.S. President George H. W. Bush has died.  The 41st president of the United States of America died Friday at the age of 94.

In a statement, his son, former President George W. Bush said “George H.W. bush was a man of the highest character and the best dad a son or daughter could ask for.  The entire Bush family is deeply grateful for 41’s life and love, for the compassion of those who have cared and prayed for Dad, and for the condolences of our friends and fellow citizens.”

“I am saddened to hear of the passing of President George H. W. Bush. On behalf of all Canadians, Sophie and I offer our deepest condolences to the Bush family and the many close friends who also continue to mourn the loss of his beloved wife, Barbara.

“George H. W. Bush’s lifetime of service began when he enlisted during the Second World War and became one of the youngest pilots in the U.S. Navy. His exemplary spirit of service and commitment to country would mark each of his roles – including in Congress, as ambassador to the United Nations, as head of the Central Intelligence Agency, and in the White House.

“President Bush was a dedicated and thoughtful leader who stuck by his convictions and values. He did much to strengthen relations between our two countries, championing the North American Free Trade Agreement and initiatives like the fight against acid rain.

“As president, he provided steady, principled leadership through a number of decisive international events.

“In his retirement from public life, President Bush remained unwavering in his service to others. He raised millions of dollars for charities related to cancer and child poverty, and made considerable contributions to disaster relief efforts in Southeast Asia and the U.S. Gulf Coast states.

“Today, all Canadians join our American friends and neighbours in mourning the loss of a great leader and friend. George H. W. Bush’s lifetime of public service has inspired a thousand points of light. His legacy will inspire many more.”

Former Prime Minister Stephen Harper Tweeted “It is with deep sadness and sympathy that Laureen and I learn of the passing of the 41st President of the United States, George H.W. Bush.  A conservative leader and a deeply devoted man, President George Bush Sr. leaves behind an incredible, enduring legacy.”