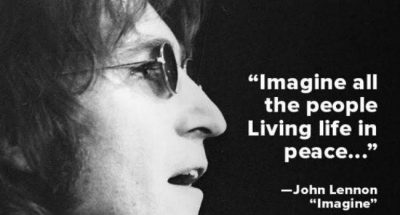 The former Beatle  was shot to death outside his New York City apartment building on Dec. 8th 1980 as he and his wife, Yoko Ono, were returning from a recording session. Mark David Chapman shot Lennon only hours after Lennon had autographed the album Double Fantasy for the 25-year-old drifter. Chapman was later convicted of the killing and sentenced to 20-years-to-life. In 1998, the album that Lennon autographed that day was offered for sale by an anonymous man who found it at the crime scene. The asking price …$1.8 million. Chapman said he hid the album  before shooting Lennon.

Here’s the link to IMAGINE by John Lennon. click here