Canadian teenager Bianca Andreescu came up one set short in an attempt at her first WTA Tour title. 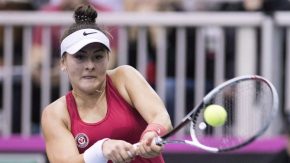 Andreescu, who entered No. 152 in world rankings and had to go through qualifying just to get in, put together numerous upsets on her way to the final in the tune-up event for the Australian Open.

Prior to falling to world No. 14 Goerges, the Mississauga, Ont., native knocked out former world No. 1 Caroline Wozniacki of Denmark and American Venus Williams, then cruised past 28th-ranked Hsieh  Su-Wei of Taiwan on Saturday in the semifinals. Wozniacki is currently the world No. 3 and the reigning Australian Open champion.

Goerges ousted Eugenie Bouchard of Westmount, Que., earlier in the week on her way back to the championship match. Andreescu, meanwhile, won seven straight matches including three qualifiers just to face the 30-year-old German in the final.

The US$250,000 WTA Tour event is a warmup for the first Grand Slam of the season.