Christine Elliott says health care in Ontario will not include two-tier care. 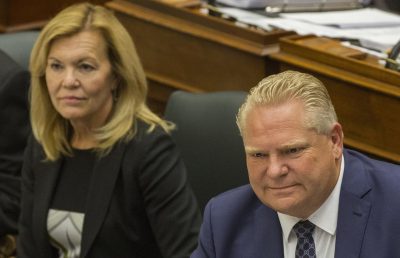 The health minister’s comments come a day after the opposition revealed a leaked draft of her government’s health care bill that NDP leader Andrea Horwath warns will open the door to privatization. Elliott claims Horwath is wrong and again insisted that her government supports public health care. Elliott says patients won’t have to pay out of pocket for further services, and there will be no new private hospitals. She adds the Progressive Conservative government plans to strengthen publicly funded healthcare and assures Ontario residents they will continue using OHIP cards. But she didn’t rule out further private health within the public system like companies that do diagnostic testing but added that’s not the focus of health-care transformation. The draft bill would allow the government to transfer the responsibilities of the local health integration networks, Cancer Care Ontario, E-Health Ontario and the Trillium Gift of Life Network to a super agency.