Today’s winter storm has a silver lining. The GTA received less snow than first predicted. About 12 centimetres fell, compared with predictions of 25 cm this morning. The city’s superintendent of roads, Mark Mills, says their plan of attack changed late afternoon when the snow changed to ice pellets and freezing rain involving more salters in addition to plows but he warns Toronto side streets won’t be plowed until 11 p.m. Tuesday night. The city shut down all non-essential services early this afternoon. Canada Post also suspended deliveries in the GTA and a third of the flights, both departures and arrivals at Pearson, are either cancelled or delayed. With reports of some downed hydro power line, Toronto Hydro reminds residents to stay 10 metres back or about the length of a football field. 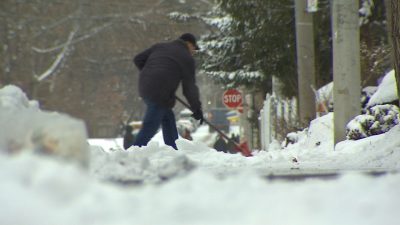