The 19-year old charged in connection with the chair toss incident from a Toronto condo building is free on bail. 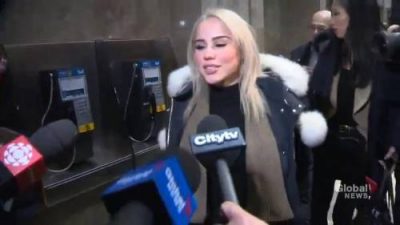 19-year-old Marcella Zoia surrendered to police this morning, charged with mischief and other crimes all related to that viral video of a chair being hurled from an upper floor of the highrise. Zoia did not speak to the media but her lawyer, Greg Leslie did. He says his client is embarrassed and would never harm anyone. He also hinted the case could be resolved before it gets to court. Zoia is back in court March 22 at Old City Hall. Her bail was set at $2,000 and ordered to live with her mother, and not have any contact with four individuals involved in the alleged event at the condo on Bremner at Maple Leaf Square.