A new Art Gallery of Ontario exhibition shows impressionism unlike you’ve seen it before. IMPRESSIONISM IN THE AGE OF INDUSTRY sheds new light on works by the French Masters from the most celebrated period in art history. Curator Caroline Shields has spent over a year  creating this first of its kind show of French art from the late 19th century. 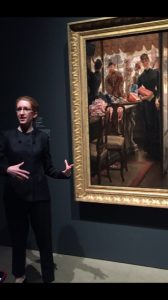 The collection tells the story largely left out of the history books. It’s about industry, not leisure and recreation the early impressionists were known for. Depicted on their beautiful and sometimes over sized canvas, the artists painted about early Paris at a time of rapid change with faster steam powered trains, increased traffic, and immigration. All are themes themes that bear a striking resemblance to issues facing current day Toronto. Expect works by the well-known French masters  like Monet, Degas and Pissarro but also some not so familiar names like Caillebotte. Halfway through the tour, hanging high above the exhibit this review by an art critic from 1857. “Industry mixed with nature has its poetic side the point is to see it and be inspired.” The exhibit runs until May 5th. Listen here to my report.