MOST EXPENSIVE HOME IN LA SELLS FOR A COOL $120 MILLION

A gigantic Los Angeles mansion built almost three decades ago for the late TV producer Aaron Spelling has been sold for close to $120 million. This week’s sale is the highest home price ever in Los Angeles County and at 57-thousand square feet, is the largest home in L-A. The unidentified buyer was represented by a Beverly Hills real estate firm. Spelling produced such Zoomer favourite TV shows as Dynasty and Charlies Angels. 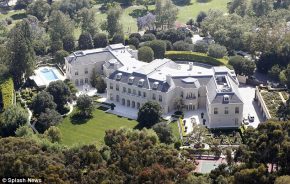 After his death in 2006, his widow Candy sold the mansion for $85 million to the daughter of Formula One billionaire Bernie Ecclestone.