SELF-MADE BILLIONAIRE WHO WANTED TO BE PRESIDENT DIES AT 89

A self-made Texas billionaire who made two runs for the White House has died. 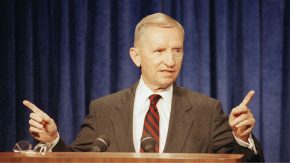 H. Ross Perot became one of America’s richest men as the founder of computer services giant Electronic Data Systems Corporation. He sold it to General Motors for 2.5-billion-dollars in 1984.  Perot rose from depression-era poverty to become one of the nation’s richest men.  In 1992, Perot jumped into the presidential campaign as an independent candidate, challenging President George H.W. Bush and Democrat Bill Clinton. Perot drew nearly 19 per cent of the vote, the biggest percentage for a third-party hopeful in 80 years. Republicans blamed him for Bush’s defeat.