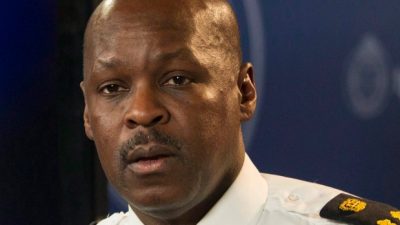 It’s been a violent long weekend in the city with Toronto Police being called to 11 separate gun incidents.

“Out of the eleven, thirteen victims.  Thirteen people who have been hit by bullets.  And out of the eleven occurrences, four have had either two or more people that have been victims, and 33 percent of these shootings that have occurred have occurred in the north-west end of the city.” said Chief Mark Saunders during a news conference Monday at Toronto Police Headquarters.

The most recent shooting happened early Monday morning when five people were sent to hospital after someone opened fire at a nightclub in the Keele and Finch area.

Chief Saunders says he will be reallocating police resources to beef up officer presence in specific areas of the city.

Earlier Monday, Mayor John Tory released a statement once again calling for a ban on all handguns as well as semi-automatic firearms and assault rifles. (See full statement from Mayor Tory below.)

The mayor says that in conjunction with changes to the laws affecting things like bail along with further investments in children and neighbourhoods, we can stop the spread of guns…and address the root causes of gang activity.

Mayor Tory’s statement on the recent shootings in our city

“The gun violence we have seen in recent days in our city is absolutely unacceptable.

I know Toronto Police are working non-stop to find those responsible for these shootings and to bring them to justice. I urge anyone with information that could help investigators solve these shootings to call police or Crime Stoppers.

I remain firmly of the belief that a handgun ban will help us address the gun violence we are experiencing in our city and the surrounding region.

I led City Council – joined by other major Canadian cities – in sending a clear message on the need for a ban on handguns, assault rifles and semi-automatic firearms.

This was always put forward as a part of the answer to gun violence together with changes to other laws affecting things like bail, additional support for police, and the paramount need for all three governments to invest together in kids, families and neighbourhoods.

All of these initiatives are much needed if we are to stop the spread of guns, help police crack down on illegal guns and those who have them, and address the root causes of gang and gun activity.”