CANADIANS IN HONG KONG URGED TO BE CAUTIOUS

Flights resumed late Wednesday at Hong Kong’s airport after two days of disruptions that forced hundreds of cancellations this week. About three dozen pro-democracy protesters remain camped out in the airport’s arrivals area, spreading posters across the floor, but they are not intruding on travellers. 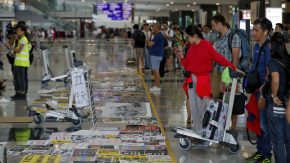 The protests began as a call to suspend a controversial extradition bill, but have expanded to include demands for improved human rights and for the territory’s leader to step down. Late Wednesday in Hong Kong, a new protest outside a police station was dispersed as police fired tear gas at pro-democracy demonstrators. Ottawa has issued an advisory to Canadians travelling to the territory. Foreign Affairs Minister Chrystia Freeland is urging the 300,000 Canadians in Hong Kong to exercise a high degree of caution.