President Donald Trump is fanning the flames of his country’s trade dispute with China by tweeting “our country has lost, stupidly, trillions of dollars with China over many years” and he went on to encourage companies to seek alternatives. China has announced $75 billion in tariffs on American products in retaliation for the Trump administration’s new import taxes. The fighting country’s are the world’s two largest economies. 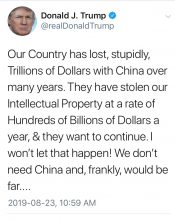 Trump will meet with Justin Trudeau at this weekend’s G-7 summit in France. White House officials say the pair will discuss ratifying the new North American Free Trade Agreement and the pro-democracy protests in Hong Kong. 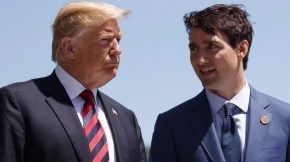