A drone pilot has been fined for flying the device over downtown Toronto as crowds celebrated the Raptors’ historic NBA championship win and again during the parade four days later. 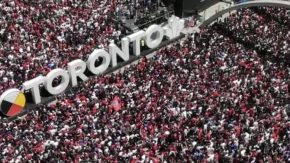 The individual who has not been identified will be served a $2,750 fine. In all, Transport Canada says the person has been fined for 11 separate violations under the Canadian Aviation Regulations. The pilot broke multiple rules including steering the drone within 30 metres of another person and through the controlled airspace of Toronto’s skyscrapers.Transport Minister Marc Garneau says safety is his number one priority and that pilots must never put people or aircraft in danger.