There’s been a plot twist in the The Booker Prize. 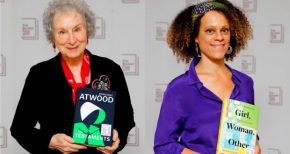 The prestigious literary award has been jointly awarded to Canadian literary superstar Margaret Atwood and British author Bernardine Evaristo. It’s the third time the prize has been shared by two authors since it started in 1969. In accepting the award at a ceremony in London, the 79-year-old Atwood said she didn’t expect to win and doesn’t believe she needs any more attention. But admits she’s quite happy to share the award with Bernardino. Evaristo becomes the first black woman to win the Booker Prize and Atwood is the oldest-ever winner of the prize. Atwood won the award for “The Testaments” her blockbuster follow-up to “The Handmaid’s Tale” while Evaristo won for “Girl, Woman, Other.” The pair will split the $63,000 purse.