Elizabeth Taylor’s personal treasures are set for the auction block in December. Known internationally for her lavish lifestyle, the actress also had a playful side and some of her personal effects are proof like a studded black leather Versace biker jacket. 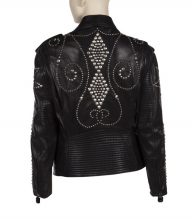 The items for the upcoming online auction were recently previewed aboard the ocean liner Queen Mary 2 in New York. And expect some deals. Organizers say costume jewelry and scarves may go for as little as $200. Other items include wigs, fine art and household items from her residences around the world. Proceeds will go to the AIDS foundation she founded, a cause she spoke about in many interviews. Taylor was 79 when she died in 2011. PROPERTY FROM THE LIFESTYLE OF ELIZABETH TAYLOR will take place Friday, December 6 through Sunday, December 8, in Beverly Hills and live online at juliensauctions.com. Elizabeth Taylor admitted in a 1998 interview she despised being called Liz.