Prince Harry and Meghan Markle have opened up about the stress of living in the spotlight in a new candid documentary. 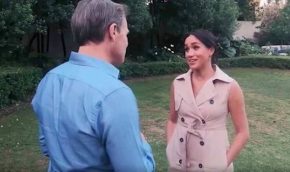 Harry and Meghan: An African Journey follows the duke and duchess of Sussex on their recent tour of Africa and in it, the Duchess tells journalist Tom Bradby about the difficulty of being under such intense public scrutiny. Markle says her British friends warned her not to marry Prince Harry because of the intense pressure from Britain’s tabloid press but dismissed their warnings because as an American, she didn’t understand how the British press worked. The pair have announced they’ll take about six weeks off at the end of the year to spend valuable family time between the U.K. and the U.S. amid their concerns over intense scrutiny. The documentary will air on Wednesday, October 23rd.