Toronto City Council has given the green light to a new transit agreement with the province by a vote of 22 to 3. Mayor John Tory, who supports the plan, convinced his colleagues around the table to get on board. Councillors Kristen Wong-Tam, Josh Matlow and Gord Perks voted down the transit agreement saying there are too many unanswered questions. The agreement sees the province backing off plans to take control of subways in exchange for the city’s support of priority projects like the Ontario Line. It’s still unclear if the target 2027 timeline for the Ontario line is realistic. The Scarborough subway extension will be delayed up to three years but will have three stops instead of one. Premier Ford released a statement says he’s proud that city council voted to support the partnership. 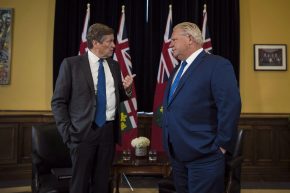