Some disappointed trick or treaters in some Quebec municipalities. Several towns surrounding Montreal are so spooked by the wet weather forecast, they’ve decided to postpone trick-or-treating festivities until Friday. 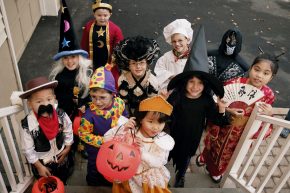 Heavy rain and high winds are expected in the Montreal region and across much of Southern Ontario. Environment Canada says the Montreal area could get up to 70 millimetres of rain between Thursday night and Friday morning. The weather agency is warning people about possible flash floods, and excess water on roads. Closer to home, an umbrella will likely become part of the Halloween costumes for kids in the GTA. Environment Canada has issued a special weather statement calling for rain into Friday morning with the heaviest to fall tomorrow Thursday afternoon just before the trick or treating begins. Cobourg and Collingwood regions could even snow flurries or snow overnight Thursday. In addition it’s darker much earlier now, so the rain could reduce visibility for drivers even more. Up to 50 millimetres is expected before the rain moves out Friday morning.