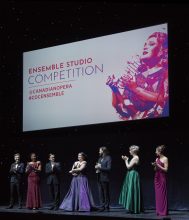 Bass-baritone Alex Halliday of Newfoundland took second prize and Toronto soprano Charlotte Siegel was awarded third prize. Selected from a pool of 109 applicants and live auditions across Canada, the seven finalists performed a final aria for the judges and the audience, accompanied by the COC Orchestra. The winners earned either a professional recording session or a live performance opportunity. COC General Director Alexander Neef said “Each of this year’s Ensemble Studio Competition finalists should be exceptionally proud of what they’ve accomplished.”