Banksy has struck again.This time the anonymous graffiti artist created a mural to raise awareness about homelessness. The piece of art, posted to the artist’s social media, features two flying reindeer spray-painted onto a brick wall that make it appear as though they’re pulling an actual bench where a homeless man named Ryan is seated. 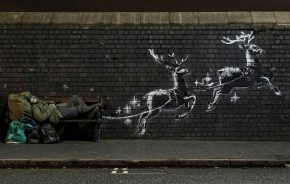 In the 20 minutes it took to film the art, passers-by gave Ryan food and drink. The video was viewed over 2 million times in the first few hours after it was posted.