TORONTO COULD GET ITS FIRST SAINT 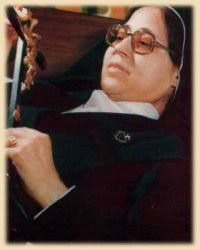 Could Toronto be getting its first saint?

The Archdiocese of Toronto has sent more than 10,000 pages of documents to the Vatican after a 10-year investigation into Sister Carmelina Tarantino.

Tarantino spent 23 years in hospital after being diagnosed with a rare form of cancer that took her left leg and hip.

Those who knew her believe she is at one with God and should be a saint, but the process could still take years.

Vatican scholars must first determine if she should be declared “venerable,” after which there needs to be two miracles in Tarantino’s name for her to be declared a saint.

Sister Carmelina Taratino died in a Toronto hospital in 1992.