As expected, Pierre Poilievre and Erin O’Toole are officially in the race to become the next leader of the Federal Conservatives according to sources. Poilievre is currently the Conservative finance critic and O’Toole, who ran for the leadership in 2017, is the party’s shadow minister for foreign affairs. A frequent guest on Zoomer Radio’s Fight Back, Poilievre told host Libby Znaimer back in June, months before the federal election, that Justin Trudeau can’t be trusted. 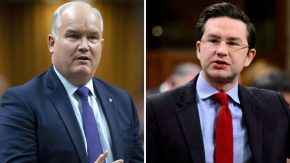 It’s also being reported that Rona Ambrose is seriously considering a run for the Conservative Leadership. And former Quebec Premier Jean Charest is expected to make his intentions clear about running in the coming days. Also from Quebec, Richard Decarie, who once worked for Conservative Leader Stephen Harper says he wants to run in part to challenge Charest but also to carry the banner of social conservatives. The Conservative Party chooses a new leader June 27th in Toronto.