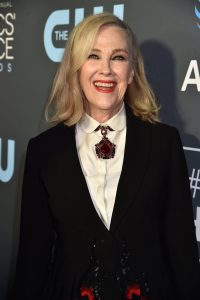 Among many films and TV shows, the 65-year-old starred alongside other Canadian comedy greats in the 1970’s Canadian  sketch comedy show SCTV. The national award of excellence recognizes an ACTRA member’s career achievements and contribution to Canada’s entertainment industry. O’Hara will receive it in April in Los Angeles presented by the Alliance of Canadian Cinema, Television and Radio Artists.